The 2021 Season has closed, we have closed 10 days early due to poor weather conditions and the need to take away the seasonal jetty on the island.

Huge thank you to all our guests, we can't hardly wait till next year.

Storm Petrel dates for 2022 are now live on this site, please book online. A Place of Time

There is an extraordinary sensation as you step ashore on Mousa that you have come to a special place. A place where you can see and feel the ages of time with its archaeological sites, desolate ruins and most famously the Mousa Broch – the best preserved Iron Age tower in existence, where the visitor can still climb the staircase to marvel at the commanding view and workmanship of this 2000 year-old building. The broch is truly legendary featuring in a couple of the old Norse Sagas as a place of captivity and hiding, and in comparatively more recent times as the secret store for smugglers.

Mousa (“Mossy Island” in Old Norse) today is an RSPB Nature Reserve with important breeding colonies of seals and seabirds including the diminutive storm petrel, hundreds of which have made their home within the mighty broch walls. There are many opportunities for visitors to observe a range of plant and wildlife including some quite rare species, and you may even be fortunate enough to catch sight of an elusive otter or passing whale!

Mousa has many stories to tell in its long history some of which may be myths, but one thing we do know, a visit to this delightful island will have a special place in your memory for a long time to come. This large ruin overlooking the Broch was once the home of James Pyper a Lerwick merchant who bought the island and built the Haa in 1783. James married first Janet Gray of whom it is said he built the home on Mousa to keep her from drink, and secondly he married Anne Linklater. James died in 1828 and Anne lived on in the Haa until her death in 1852. The 1841 Census shows the following information on the household: The landing point at the West Ham pier on Mousa used to be just a suitably accommodating rock spur, however over the years this has been significantly improved upon! The old building above the pier, Ham House, was built about 1770 as a fishing booth associated with fish curing on the nearby beach. The small-sized Shetland breed of sheep have long been grazed on Mousa due to being better suited to the conditions. Dipping of these sheep was carried out using a boat as a ‘dipper’ until purpose-built troughs were created behind the building. The booth today is used mainly by the RSPB.

Nearby is one of the sites of an ancient Burnt Mound – the purpose of these was possibly for heating water to break up stones used in some now unknown process. 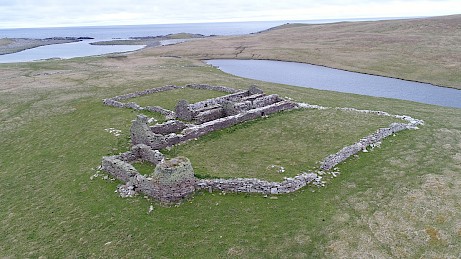 This was the farm that supported the Pypers in the Haa. The 1841 Census states that Erasmus Jameson, Farm Servant, age 40, lived there with his wife and five children. We know the Jamesons left Mousa on 4 May 1842, and Andrew Jameson, the eldest son then aged 13, left a memento of this poignant event when he inscribed his name and date on a north gable corner stone.
Attached to the gable of the barn is a circular kiln for drying grain prior to grinding. This is a good example of what was a common type of kiln in the South Mainland of Shetland. There is a fire hole at the base of the entrance opening which was used to light the fire below the drying platform. Peat would have been used and this had to be brought by boat from the mainland. At the western end of the loch can be seen two Burnt Mounds close together. Legend has it that a minister’s daughter was drowned in the South Loch. Between the South Loch and the beach are the ruins of a Click Mill where the millstones were turned by a horizontal wheel driven by water from the loch. Burgi derives from the Old Norse “Borg” meaning fort, and Ayre from “Eyrr” meaning sand or gravel bank. This beach was used for drying fish and the remains of a former fishing booth are still just evident - the stones from this were used in the repair of the Broch.

The following short guide is intended to give the visitor some of the background on what makes this island a remarkable place to visit. It follows a clock-wise circuit of the South Isle ending with the Broch. A gentle pace will easily allow enough time to complete this circuit and visit the Broch.

We want you to enjoy this special place and ask you to observe the following:

The Mousa geology - how the island’s rocks formed (by Allen Fraser).

The sandstone rocks that make up the island of Mousa began to form some 390 million years ago in the Mid-Devonian Period when Shetland was small part of a vast continental landmass, positioned about 20 degrees south of the Equator. Colloquially rocks deposited about this time are known as Old Red Sandstone.

At that time the landscape and climate would have been similar to that of the Basin and Range areas of the western USA today. High snow capped mountains of the great Caledonian Mountain Chain (similar to the Sierra Nevada ranges) would have towered in the distance above both sides of a deep narrow valley. The climate in the valley floor would have been that of a hot desert, something like California's Death Valley today.

When the floods subsided, standing pools of water formed on the banks of these streams to dry out in the sun leaving thin layers of fine sandy mud. The wet mud contained iron which oxidises in a desert environment to form a microscopic layer of hematite iron over each tiny grain, thus staining the sandy mud dark red. The baking hot sun also dried out the mud so that it would shrink and crack into distinctive polygonal patterns. Hot winds would whip up to blow desert sand around to fill in the cracks, and/or another flash flood would come to lay down layers of sand on top to fill the cracks and bury the fine muddy layers completely.

Climatic cycles caused lakes to form on the valley floor on top of the river sediments. Some lakes had fish and were connected by river systems to other lakes and perhaps to the sea. Fine calcite rich mud would accumulate on the lake bottom to bury the earlier sediments. Eventually the lakes would dry out as climate changed and river sediments were once again deposited across the valley, burying the fine calcareous muds of the lake bottoms.

Now hardened into rock, the sediments we see on Mousa formed by exactly the same processes as we see sediments forming in the western USA today. How do we know all this after 390 million of years tectonic plate movements and erosion,? Well, today at 60 degrees north, just a little bit of the ancient desert valley survives along the coast from Lerwick to Sumburgh and includes Mousa. Each layer of ancient sediment preserved the one below so that when we look at the rock exposures on Mousa today we can tell how they formed by their characteristics of deposition.

If you look closely at the rock outcrops as you follow the trail around Mousa, you will see that the sandstone has been laid down in layers, as they would be in the bed of a river. Sometimes you will see that these layers (beds) lie flat and parallel to each other, these were made by slow meandering rivers. In other places beds may cut each other at an angle, this is known as cross bedding and form in faster flowing braided streams. In some places you will see the beds are bent upwards almost in an inverted funnel shape; this occurs when a heavy load of sediment is quickly dumped by a flash flood on top of already water saturated sand layer forcing the water to escape upwards, distorting the beds above into that distinctive shape.

Also on some flat slabs you will see the polygonal cracks of the iron-red sandy mudstone that have been filled in by coarser sands. There are some fine fresh exposures of this near cliff-tops where winter storms have split off slabs of rock and tossed them inland. Two narrow bands of the the fine calcareous mudstone from the lake bed run NW-SE through the island, but these are not well exposed on the trail but they can be seen with some difficulty near the broch.

Nothing is more symbolic of Mousa, or indeed world famous, than this most complete Iron Age tower. One of over a hundred possible brochs in Shetland these enigmatic buildings are mainly concentrated in the Northern Isles, Caithness and the Western Isles. Dating from about 2000 years ago, the purpose of these towers is a mystery – clearly they were defensive strongholds, but built by whom and against who? There is no doubt however that Mousa is a uniquely important archaeological site.

Enter through the small doorway in its 5m thick walls and explore the chambers and cupboards created in its double skin wall rising to a height of over 13m. It would appear to have had five internal platforms accessed by a staircase between the walls culminating at the top with a panoramic view of Mousa Sound. Together with the broch at Burraland on the opposite shore (much depleted but worth a visit) they would have presented an intimidating defence to the Sound. The fact that there were few settlements on Mousa probably saved the Broch from being later used as an easy source of building material.

Mousa Broch continued to be used over the centuries and is mentioned in two Norse Sagas both relating to the abduction of a member of the fair sex. In the 19th Century the Broch was used by smugglers as a place to hide contraband such as tobacco and gin from the Customs Officers from Lerwick.

Today the Broch enjoys a more acceptable existence as the nesting site for hundreds of Storm Petrels. A late evening trip on the Mousa Boat to see these small birds returning from a day feeding out to sea is a truly memorable experience.

To complete the circuit, at the Broch return to the Mousa Boat following the path north (sea on your left) allowing about 15-20 minutes.